Plotting Versus Pantsing and All Combinations Thereof

Are you a plotter or a pantser or a hybrid of the two? Do you dream story ideas or do you work for months at planning out the perfect plot? What are the positives and negatives of the various methods of writing a novel? Is one better than the other? If you’re a pantser, how do you stay on track? What happens when your characters get away from you? What if your plot veers off course? If you’re a plotter, how do you prevent becoming bored with the story before you ever begin your first draft? Can a writer “over” plot? Elle Ire (pantser/plantser) and Jose Pablo Iriarte (plotter) will explore the pros and cons of both methods and reveal what it’s like when two very different kinds of writers live under the same roof. 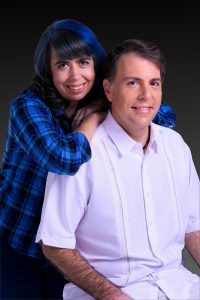 José Pablo Iriarte is a Cuban-American writer and teacher who lives in Central Florida. José‘s fiction can be found in magazines such as Lightspeed, Strange Horizons, Fireside Fiction, and others, and has been featured in best-of lists compiled by Tangent Online, Featured Futures, iO9, and Quick Sip Reviews, and on the SFWA Nebula Award Recommended Reading Lists for 2015, 2016, 2017, and 2018. Learn more at www.labyrinthrat.com, or follow José on Twitter @labyrinthrat.

Elle E. Ire lives in Central Florida where she teaches writing to middle school students. She is represented by Naomi Davis at the Bookends Literary Agency. Her first novel, VICIOUS CIRCLE, released from Torquere Press in 2015 and will be re-released by Dreamspinner Publications later this year along with her new novel, THREADBARE, the first in the STORM FRONTS series. Visit her website elleire.com, or follow Elle on Facebook https://www.facebook. com/ElleE.IreAuthor/ or Twitter @Lisairi.